After the announcement of RBI about rs 50000 cap on the withdrawal of deposits unless a few exceptional rules, We became very curious to know about the reason behind its failure.
Not only we the mango people but also the News channel vigorously jump into that topic and now digging all the historical stuff & serve us in E la carte. Now why I am saying this, cause this is a certain prediction can be done by anyone if he or she was trying to explore some of the news about this bank from the mid of last June or June 2019.

So only selling a tiny percentage of promoter contribution leaded market to drop of Rs 100 per share which indicated that the market was very volatile.

And after that, it has never reached that level.

So what we know from that here in this stock the key factor is promoter contribution.

As Yes Bank has had its share of bad luck when it decided to invest in some companies that went on to fail, such as Jet Airways. Some other failures of the banks are IL&FS, Dewan Housing, Jet Airways, Cox & Kings, CG Power, Cafe Coffee Day, Altico, etc.

At these moments we all knew that the bad loan not gonna come anymore. Now only hope was to belive in promoters & management that they were the only ones to survive this entity. This is why the price became so low in 2018 September.

Now what they did

See the above picture(zoom it) from June 2019 to December 2019 promoters were continuously selling their shares. If we calculate, it became 57.89% of promoter contribution already sold within 6 months.

So I think you are wise enough to understand why the share price became Rs 16.5.

I just started man. let's go through their annual report.

See the above picture. from Dec 2018 their interest earned is depriciating. It means the public was withdrawing their money so continuously that even a new account opening was not able to support it. 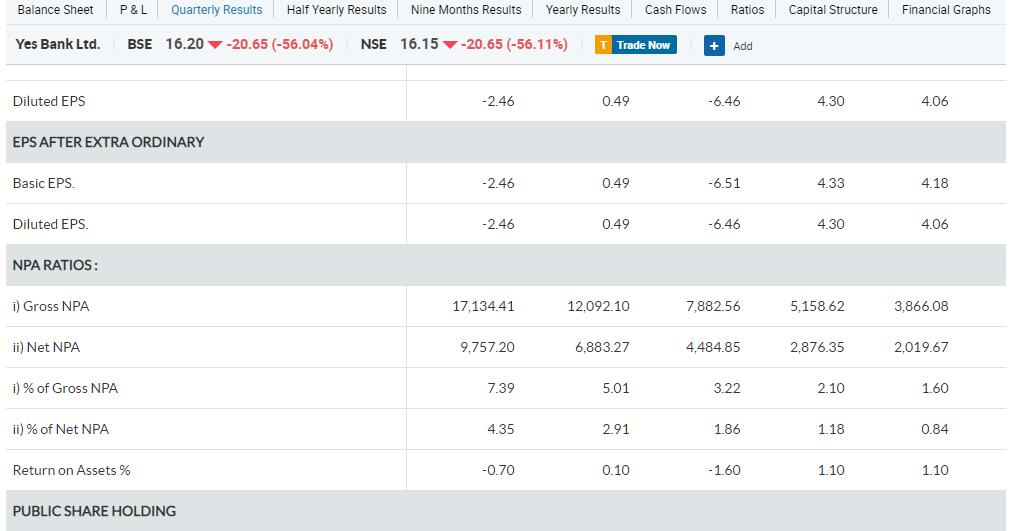 in 2019  provision was  7377.21 (43%)
Hmm. That's good they maintained a certain percentage of provision.
But just focus on the GROSS NPA that increased ferociously in the last 2 years even in that departing condition.

The breaking news is


So now I think you have got your answer